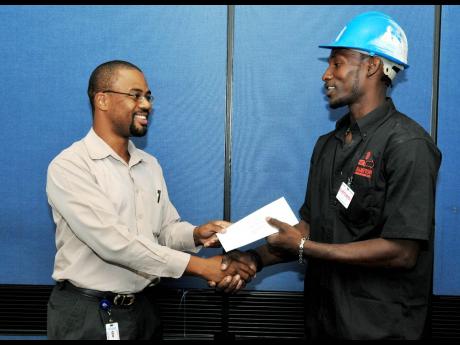 Gleaner News Editor Robert Hart (left) hands over a cheque from a donor who wishes to remain anonymous to Alvin Alberga, whose house was destroyed by fire last week, leaving him and his five puppies without a home.- Kyle MacPherson/Freelance Photographer

From somewhere deep in the rubble, a ray of hope peeks out for 35-year-old truck driver Alvin Alberga, as residents of his community rally to assist the man whose home was razed by fire a week ago.

Bay Farm Road in Olympic Gardens is long known for fearsome gang violence, but the people are demonstrating that generosity still resides in their hearts.

They have come out armed with their tools, working assiduously as they carry out a rebuilding exercise in an attempt to give Alberga another chance to call a place home.

"I am very grateful to all these people for dedicating the time and energy to help me build back a home," he said.

Last week, Alberga was featured in
The Gleaner
immediately after the incident which left him homeless, saying he was unsure of his next move in life.

With only the work uniform he was wearing and his five puppies as company, Alberga said he was living in hope and depending on God's mercy for survival.

"I don't know what I am going to do because I lost everything. Even my savings of $135,000 that I could have now used to put myself back on track is gone. All I found is half of a thousand-dollar note," he had said.

But it is obvious one week after that all hope was not lost for the young man.

"I have been receiving help since the article was published and I am very thankful," Alberga told
The Gleaner
yesterday.

Though his hands are full in getting his life back on track, Alberga said his daily routine does not exclude his puppies that are now safely placed at the Jamaica Society for the Prevention of Cruelty to Animals (JSPCA), where they were tested and treated after the incident.

"I want to say thanks to JSPCA for keeping my puppies for me until I can care for them again. I go and look for them regularly just to see that they are doing ok," he said.

Alberga praised the JSPCA, noting that it has assisted him with a case of dog food, along with $20,000 to help him with the rebuilding exercise.

He also said he has received assistance from other entities such as Champion Custom Brokers Ltd and Rough and Tough Trucking.

Since the story was published, several persons from both Jamaica and overseas have contacted
The Gleaner
to assist.