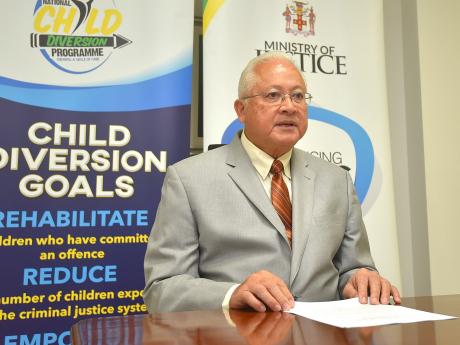 Minister of Justice, Delroy Chuck, speaking at a recent JIS Think Tank. So far, 305 children have been diverted from the criminal justice system through the work of the national programme.

So far, 305 children have been diverted from the criminal justice system through the work of the national programme.

Addressing a recent JIS Think Tank, Chuck argued that placing children before the court system and labelling them as criminals so early in life can lead to them becoming repeat offenders.

“When we look at recidivism in the prisons right across Jamaica and across the world, the persons who suffer from recidivism, are persons who from an early age were wayward and started their criminal activities young. That is why it is so very important for us to intervene at this stage in their development,” he said.

Chuck said that the Child Diversion Programme provides the necessary interventions to reform and rehabilitate the youth offender.

He likened it to the Drug Treatment Courts, where offenders with drug problems are required to complete a six-month court-directed treatment and rehabilitation programme.

He explained that once the “counsellor or the treatment officer can say ‘you are okay’, they (offenders) go back to the court and after six months they are clear. If they fail to follow the programme, they are dealt with judicially”.

In the case of child diversion, a programme of work and activity is approved by the police officer or the judge, which the participant is expected to follow.

“From there, the police officer and the child diversion officer will say ‘yes they followed faithfully’ and they believe that this child has now recovered from the pranks or whatever activity they were engaged in and are now ready to be released from the programme,” Chuck said.